Wow,
that was a whole lot of Zin!  I think my favorite was the OZV actually,
it had a really good weight to it but kept the fruit-forward bang that
makes it a Zin.  Did everyone notice the difference between the
American Zinfandel and the Italian Primitivo?  I would characterize it
as more earthy and less fruity.  I hope everyone loved the ribs as
well, the Tequila Lime recipe was a big favorite — I suggest you give
it a try next time!

Since we are doing two different ribs with one oven, we use 275 F to slow cook them together for 5 or 6 hours. The results were good – the meat felt out the bone and still juicy and tender.

2. Tequila and Lime Baby Back Ribs with a Guava and Ginger Glaze.

3. Pasta with Artichokes, Pancetta, Mushrooms, and Peas. Download Pasta Recipe
This dish was great but it take a lot of efforts to go the artichokes.  Make sure you buy larger size of artichokes to make it worth it. 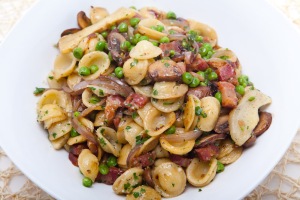 4. Asparagus with Citrus and Oregano. You have to try this one.  It's so easy and tasty that you won't believe how easy it is to make.

5. Rhubarb Plum Tart With Orange Glaze. Since it's not Rhubarb's season yet, we use Plum to replace it. The taste still great.